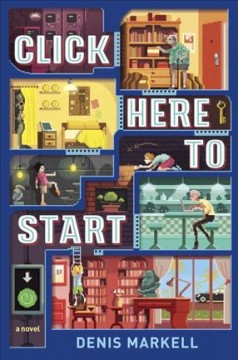 by Denis Markell, young fans of Ernie Cline’s Ready Player One will love this classic video game inspired mystery filled with elements of Escape from Mr. Lemoncello’s Library and From the Mixed Up Files of Mrs. Basil E. Frankweiler.

Gr 5–8—In Markell’s highly entertaining debut novel, 12-year-old Ted; his best friend, Caleb; and new girl Isabel take on a riddle left by Ted’s great-uncle. The World War II veteran bequeathed an apartment and all the treasure it contains to  Ted. The catch: the treasure is hidden behind a plethora of clues, puzzles, and traps. Ted finds himself in the middle of a real-life “escape-the-room” game (of which he is an expert, thank you very much), and it takes the friends working together to  solve it. Things are made all the more dangerous by a villain at their heels. This is a well-paced read with fully realized and likable characters, but it is not without flaws. The author purposefully introduces several uncomfortable racial and ethnic stereotypes concerning Ted’s biracial identity (the protagonist is Japanese American and Jewish American). Some stereotypes are explored and offer opportunities for richer discussion, such as the various ways Ted experiences and responds to  microaggressions. At other times, Ted himself espouses many tired stereotypes about Asian people. Though the author seems to  have made these choices deliberately to  spark conversation, some of the lines (“An old Chinese woman passed by and looked down at me. She looked at my Jewish dad, then gripped Mom’s arm, leaned in, and crowed, ‘Asian blood STRONG!'”) and characterizations are jarring and may, without further context for the intended audience, actually serve to  subtly reinforce damaging stereotypes rather than destroy them. While the young characters are perfectly relatable, the adults often act irrationally. Additionally, two of Ted’s most dangerous decisions—getting in the car with a stranger and melting a breaker in the hospital—are never acknowledged as such. Several deus ex machina moments near the end are too convenient to  be believed and betray a lack of respect for the intelligence of middle grade readers. Problems aside, this novel should have strong appeal to  gamers, fans of video game-based stories, and reluctant readers. VERDICT Despite some truly funny moments, this is a flawed offering. Consider carefully for middle grade collections.—Taylor Worley, Springfield Public Library, OR –Taylor Worley (Reviewed 04/01/2016) (School Library Journal, vol 62, issue 4, p151)